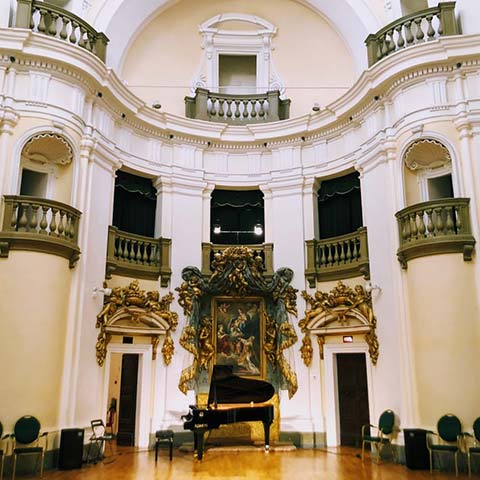 Auditorium di Santa Cecilia, Perugia / Info
Auditorium di Santa Cecilia, Perugia / Info
A valuable baroque theater, the Oratorio Santa Cecilia was built in just three years to a design by Pietro Baglioni (1687-90), its plan in the form of a Greek cross, with a square central mass and four arms of equal length. Located in the historic center of Perugia, it is the only Baroque monument in the city, together with the adjacent Church of San Filippo Neri. It was the first building in Perugia specially created as a music hall, upon request of the Fathers of the Congregation of the Oratory.
Above the stage we can see 'The Madonna and Child with Santa Cecilia' by Carlo Lamparelli di Spello, dated 1688. A double cornice identifies two tiers of boxes. The Auditorium is surmounted by a large and bright dome. After decades of decay and neglect it was restored and reopened to the public in 2001. It is currently used for concerts and cultural events. 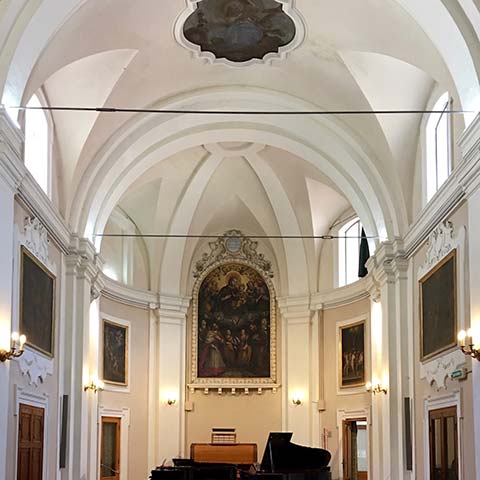 Auditorium Marianum G. Frescobaldi / Info
Auditorium Marianum G. Frescobaldi / Info
The former parish church of Santa Maria di Colle was renovated in the 1700s by Alessio Lorenzini, the same architect who designed the Teatro Comunale "Francesco Morlacchi” in Perugia. The church has then been used as a concert hall since 1961, when it was equipped with a 1375-pipe Mascioni organ, with 3 manuals and pedal board. With excellent acoustics for chamber music, and two grand pianos, the Auditorium Marianum is the main venue for all the activities of the Istituto Musicale "Girolamo Frescobaldi".
Renowned musicians such as organists Fernando Germani and James Goettsche, and harpsichordist Kenneth Gilbert, performed here. Canadian pianist Angela Hewitt held her Third International Piano Masterclass at the Auditorium in 2016.
The Auditorium houses paintings by 17th and 18th-Century artists Benedetto Bandiera, Giacomo Boccanera, Cristoforo Gasperi, and Vincenzo Monotti. 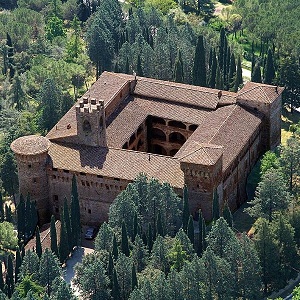 Castle of the Knights of Malta, Magione / Info
Castle of the Knights of Malta, Magione / Info
The Sovereign Military Order of Malta, owner of the Castle of the Knights of Malta in Magione, was founded about nine centuries ago in Jerusalem with the aim of protecting the Holy Land. Originally called the "Order of St. John of Jerusalem", it is one of the most ancient institutions of western and Christian civilisation. The castle dates back to 1150-1170 and was meant as a shelter for pilgrims going to Rome or to Jerusalem, also being conveniently located close to the Via Francigena which was used for travelling to Santiago de Compostela. The present structure is the result of several changes during the centuries. The courtyard where the concerts are held dates from 1471. In the oldest part of the castle, there is a Romanesque-styled church with a rounded vault honouring St. John the Baptist. Inside are two precious frescoes of the school of Pinturicchio, dating from the early sixteenth century. In 1502, the castle was the seat of a conspiracy organized by some Italian noblemen against Cesare Borgia, known as the “dieta alla Magione nel Perugino” and which Machiavelli refers to in The Prince. Today, with its headquarters in Rome, the Order carries out its activities in 110 countries and succeeds in engaging volunteers all over the world for humanitarian assistance and social activities. The Order has diplomatic relations with 92 countries as well as with European organisations and a seat at the United Nations. It is neutral, impartial and non-political, which is why it can successfully act as a mediator. The farm of the Castle of the Knights of Malta produces 100,000 bottles of wine each year, with production rising steadily. It also produces extra virgin olive oil. Placed in the restored ancient rooms of the castle, the cellar is a beautiful example of tradition and innovation. 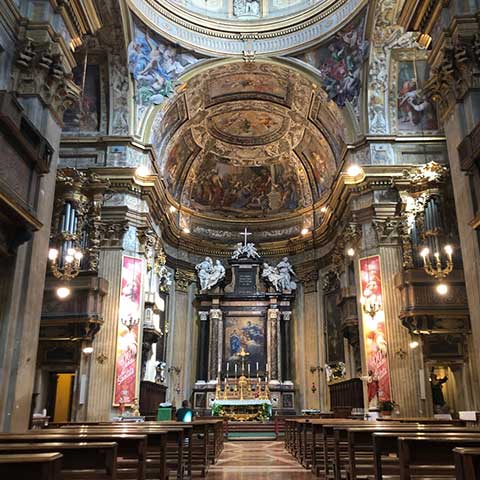 Chiesa di San Filippo Neri / Info
Chiesa di San Filippo Neri / Info
The Church of San Filippo Neri is the most important and the only authentic Baroque building in Perugia. The Vignola-style facade dates back to 1665 and was designed by the Roman architect Paolo Marucelli, while the church itself was built between 1627 and 1634. With its barrel vaulted single nave and lateral chapels, the interior is richly decorated with frescoes of a variety of painters who worked on them between the 17th and the 18th century. The Immaculate Conception above the main altar is by Pietro da Cortona and was painted in 1662. 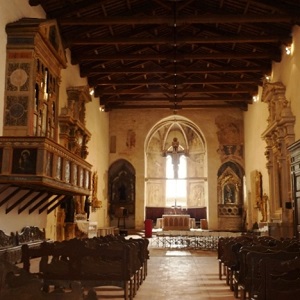 Chiesa di San Francesco, Trevi / Info
Chiesa di San Francesco, Trevi / Info
The Church of San Francesco is situated on an older church built in 1268 and dedicated to the Virgin Mary. In the first half of the 14th century the Church was enlarged and during the 16th century it was restored. In 1777 the cotto tiles on the floor were remade. The architectural structure is very simple, in the style of the mendicant orders: the nave has wooden trusses, and the central pentagonal apse is flanked by two rectangular chapels. The church in Trevi is very similar to San francesco in Montefalco, dated back in the fourth decade of the 14th century. The apse has frescoes from the first half of the 14th century on the walls, depicting the stories of the life of the Virgin Mary. At the center of the apse there is a cross of the beginning of 1300. The walls retain traces of frescoes and large altars as requested by the Catholic Reformation rules. Worth noting: the canvas with the Madonna and Child and the Souls in Purgatory by Ascensidonio Spacca, known as il Fantino, and the monumental organ, considered "a rare surviving specimen of this type that was defined, during the Renaissance, as a wall-organ". It was built by the master Paolo Pietro di Paolo di Montefalco in 1509, and was played for the first time at Christmas Day. The restoration of the ancient instrument, carried out by Organi Pinchi Foligno, began in the 1990's, with original 16th-century materials. Opened in 2005, it is one of the oldest organs remaining in Europe dating back to the sixteenth century. 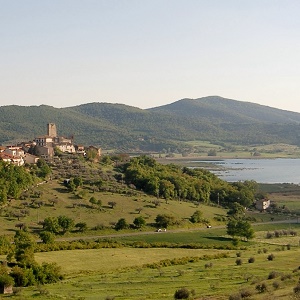 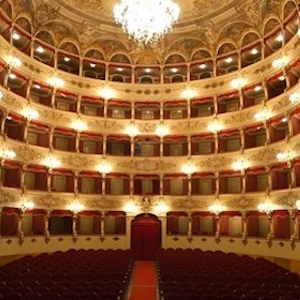 Teatro Morlacchi, Perugia / Info
Teatro Morlacchi, Perugia / Info
The Teatro Morlacchi, formerly Teatro del Verzaro, is the largest theatre of Perugia. It is named after the musician Francesco Morlacchi.
In 1777 the local middle class decided to build a new theatre in response to the nobles who had built the Teatro del Pavone; ninety families then formed the "Society for the construction of a new theatre", which bought an old convent and commissioned the project to architect Alessio Lorenzini. Lorenzini gave the hall the classic shape of a horseshoe and facing with the problem of limited space, having to reserve a box for each client family, he decided to set up the entire structure diagonally and to reduce the entrance hall.
The works began in June 1778, and ended in April 1780. The inauguration was held on August 15, 1781, and the theatre could seat 1,200 people at the time.
In 1874 it was restructured and modified by Guglielmo Calderini, who gave the theater its current structure; simultaneously it was redecorated by artists like Francesco Moretti and Mariano Piervittori. At the new inauguration of the theatre it was named after the Perugia-born musician Francesco Morlacchi.

The activities of the theatre continued until the early twentieth century, but declined during the years of Fascism until it was requisitioned by the Germans during the occupation of the city and allocated to shows for their soldiers. After the war, the theatre was seriously damaged and the City between 1951 and 1953 financed the restoration work, which included a re-roofing and the modification of stage, orchestra pit and marble floors.
Currently the theater has 785 seats. The stage is 20 meters wide, 10.5 meters deep. The proscenium is 10.5 meters wide. 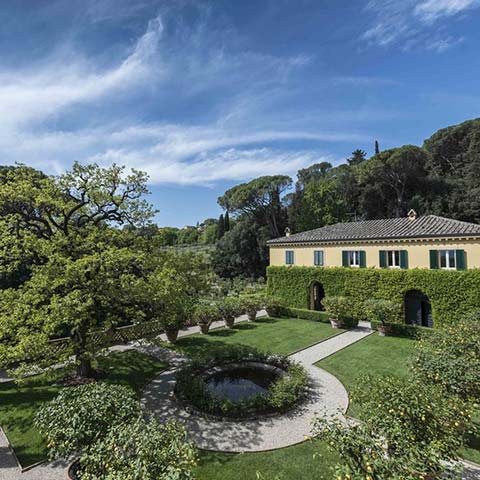 Villa Valvitiano, Perugia / Info
Villa Valvitiano, Perugia / Info
Villa Valvitiano consists of the main residence from the early 1800s and the orangerie dating back to the late 1700s.
Built by the Conestabile della Staffa as a country house, it then became a property of the families Bonucci Piccolomini first and then, from the end of the 1950s, Buitoni. The park is enriched with monumental trees and has an Italian garden on two levels which hosts, in the warmer seasons, the lemon collection sheltered in the orangerie during the winter. It is surrounded by five hundred olive trees and offers a spectacular view of Assisi and Mount Subasio.

We use cookies to give you the best experience on our website.
You can find out more in Settings.

This website uses cookies so that we can provide you with the best user experience possible. Cookie information is stored in your browser and performs functions such as recognising you when you return to our website and helping our team to understand which sections of the website you find most interesting and useful.

Strictly Necessary Cookie should be enabled at all times so that we can save your preferences for cookie settings.

If you disable this cookie, we will not be able to save your preferences. This means that every time you visit this website you will need to enable or disable cookies again.